In Anita Brookner’s three prior novels we encounter young women of either academic or literary aspirations grappling with the decision of how to launch into a more adult and settled life.  In her 1984 novel, Hotel Du Lac we join a woman in full flight.  Edith Hope, about a decade older than her main characters in those earlier works, is still grappling with the question of how to be safe and loved and free.

Hotel Du Lac is a beautifully balanced and deeply enriching novel—it is no surprise it won the prestigious Booker Prize for 1984.  Thematically it doesn’t veer very far from Brookner’s established territory but it is a more fully-realized treatment, a deeper set of observations on the complications of womanhood for women of a certain caste at a certain moment in both their personal history and the history of Europe.

I would like to avoid any spoilers and stay away from too much in the way of plot points but suffice to say  Hotel Du Lac centers on Edith, a moderately successful writer of romance novels who has fled London in the wake of some personal disaster to spend some time in an aging but elegant Swiss hotel. The cause of her exile is a mystery.  The novel’s main device is to thrust us into her purgatorial ruminations on the basic question of what it is to be a woman and to figure out how and when she will return to her prior life.

Brookner uses Edith and her writer’s eye and wit to create highly detailed sketches of the largely female guests at the hotel. Failing to employ a trace of sentiment, Brookner’s observations employ almost a nature documentary style of recording women of a certain means and of a certain age. Here she offers a cut on a pair of fellow hotel guests, the mother and daughter duo of Iris and Jennifer Pusey:

“Her rather plump artless body was, Edith saw, set forth by clothes which were far from artless and possibly too narrow; Jennifer managed to give the impression that she was growing of out of them.  Everything about her was as expensive as her mother’s money could make it, but in a different style from Mrs Pusey’s careful elegance.  In her navy linen trousers and her, perhaps too tight, white jersey, Jennifer was determinedly gamine.  Edith wondered how old she was.  She looked very young, as did Mrs Pusey, but in a way she could not define they were both out of date.”

She clearly trains her sites on what is of paramount importance to these women, the power of their appearance, and in so doing, she extracts a great deal about their relationship to each other and their relationship to the world.  These are women who are clearly trying to be in fashion and while they may pull off an appearance of youth (we find out later that both women are much older than Edith initially suspects) they appear to be from another era.  In the next half of the description the knives sharpen a bit and we see that Edith is brimming with insight fueled by her own subjectivity:

“They referred almost constantly to times gone by, times illuminated by glamour, happiness, success, confidence, and security, times of necessity remote and mysterious to their interlocutor. Edith reflected how enormously one-sided conversations with the Puseys were always likely to be. They imposed their past as deliberately as they did their present, and to both of these one was expected, in some curious way, to pay homage.”

A far less articulate mind might just leave it at, “these women were overbearing.”  But as a participant-observer Edith hones in on how the social machinery employed by such women actually works to order female relationships.  And she touches on the theme established in earlier works of how certain women use their past as a cudgel to mandate that attention be paid to them in the here and now. Subjecting strangers to a litany of anecdotes and rose-colored reminiscences is not merely immodesty or some form of generalized feminine neurosis but rather a strategy to ensure a certain privileged social status.

By assigning intention to these women and their social maneuvers Edith refuses to dismiss them or reduce them to the merely ridiculous or trivial. These women are skilled and rather than be avoided they should be engaged. The genesis of what Edith can see and hear from these women is given some real thought and, as it can only be, is run through Edith’s own machinery.  A machinery, as Edith acknowledges later in the novel, is wrought with it’s own set of grievances and biases based in the past:

“I have been too harsh on women, she thought, because I understand them better than I understand men.  I know their watchfulness, their patience, their need to advertise themselves as successful. Their need never to admit to a failure. I know all that because I am one of them. I am harsh because I remember Mother and her unkindnesses, and because I am continually on the alert for more. But women are not all like Mother, and it is really stupid of me to imagine that they are.”

It’s such a bold admission at some level because she acknowledges that the attention to detail and the mental energy she invests in sketching these women is a self-preserving vocation, (“know they enemy”) but, so too does she completely call out her own bias and blindness. So, due to Brookner’s literary chops and emotional generosity, we encounter the momentary unreliability of the narrator but the primacy and purity of the insights are maintained and passed on for our entertainment and enlightenment. She’s deemed it worth her while to spill a kind of toxic tea but never with the intention of true harm, she gladly resuscitates her victims acknowledging that we’ve all got to survive and the performance of one’s self is very often the most potent strategy to thrive is the social sphere.

As always, there are so many tasty passages in this novel that speak to Brookner’s talent.  However, the main takeaway for me was just how authoritative she is as a writer.  Edith is wooed in this novel, she’s courted in perhaps some of the most unromantic passes you can imagine, yet, there’s nothing but dignity and strength even in her most vulnerable moments.  So, assuming there is much of Brookner in Edith, one can’t help but be drawn to such confidence and integrity.  As if no matter how revealing and exposed she is by the existence of a deep personal flaw, we are left in awe of her dazzling simplicity in articulating this flaw.  And this is but the tip of the iceberg as to what makes Hotel Du Lac such a splendid read.

Next up, Family and Friends. 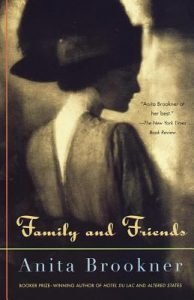